The avenue, surrounded by late Ottoman era buildings (mostly from the 19th and early 20th centuries) that were designed with the Neo-Classical, Neo-Gothic, Renaissance Revival, Beaux-Arts, Art Nouveau and First Turkish National Architecture styles; as well as a few Art Deco style buildings from the early years of the Turkish Republic, and a number of more recent examples ofmodern architecture; starts from the medieval Genoese neighbourhood around Galata Tower and ultimately leads up to Taksim Square.

Galatasaray Square is located at approximately the center of the avenue and is home to the oldest secondary school in Turkey: the Galatasaray High School (Galatasaray Lisesi), originally known as the Galata Sarayı Enderun-u Hümayunu (Galata Palace Imperial School).

In the historic Karaköy (Galata) district towards the southern end of the avenue, it is possible to see the world's second-oldest subway station, generally known and referred to as simplyTünel (The Tunnel) which entered service in 1875. Moreover, one of the finest educational institutions established in Turkey, the German High School of Istanbul (Deutsche Schule Istanbul in German, Özel Alman Lisesi in Turkish) is also located near Tünel.

The cosmopolitan avenue is surrounded by an array of historical and politically significant buildings, such as the Çiçek Pasajı (Flower Passage) where small, intimate restaurants and taverns are found; Balık Pazarı (The Fish Market); the Hüseyin Ağa Camii Mosque; theRoman Catholic churches of Santa Maria Draperis and S. Antonio di Padova; the Greek Orthodox Haghia Triada; the ArmenianÜç Horan (among many other churches); several synagogues; mosques; academic institutions established by various European nations such as Austria, France, Germany and Italy in the 19th century; and consulates (former embassies before 1923) of several nations including France, Greece, the Netherlands, Russia, Spain, Sweden, and the United Kingdom.

the Ottoman period, the avenue was alled Cadde-i Kebir (Grand Avenue) and was a popular spot for Ottoman intellectuals, also becoming a center for European foreigners and the local Italian and French Levantines who referred to it as Grande Rue de Péra. When 19th-century travelers referred toConstantinople (today, Istanbul) as the Paris of the East, they were mentioning the Grande Rue de Péra (İstiklal Caddesi) and its half-European, half-Asian culture. With the declaration of the Republic on October 29, 1923, the avenue's name was changed to İstiklal (Independence) for commemorating the triumph at the Turkish War of Independence.

In September 1955, during the anti-Greek Istanbul Riots, the Avenue was pillaged in one night, while it was covered with pieces of glass, clothes, smashed white goods, rolled down and burned automobiles and other goods, all belonging to the wrecked shops.

The avenue briefly fell from grace in the 1970s and 1980s, with its old Istanbulite inhabitants moving elsewhere, and its side streets – then stereotyped with their bars and bordellos – being populated by migrants from the rural areas of Anatolia.

However, during the late 1980s and early 1990s, a massive restoration process took place, master-planned and executed by the Istanbul Metropolitan Municipality and Beyoğlu Municipality (including the restoration of the historic buildings, new pavements for full pedestrianization, and the reinstallation of the historic trams), bringing the avenue its old charm and popularity. İstiklal Avenue once again became the center of fine arts and leisure in Istanbul, with real estate prices skyrocketing as a result. Numerous new art galleries, bookstores, cafés, pubs, restaurants, shops and hotels were opened. The venues around the avenue became the host of many international art festivals, such as the annualIstanbul Film Festival. İstiklal Avenue is also a popular venue for all sorts of parades, marches, gatherings and protests in the city.

Taksim Gezi Park is an urban park next to Taksim Square, in Istanbul's Beyoğlu district (historically known as Pera.)[1] It is one of the last green spaces in Beyoğlu and one of the smallest parks of Istanbul. In May 2013, plans to replace the park with a reconstruction of the former Taksim Military Barracks (demolished in 1940) intended to house a shopping mall sparked the nationwide 2013 protests in Turkey

The Taksim Gezi Park is located at the former site of the Halil Pasha Artillery Barracks, a large square-shaped military barracks complex with an extensive open, drill-ground, which was constructed in 1806[3] near the "Frank and Armenian burial grounds",[4][5]or the former Grand Champs des Morts.[6][7] 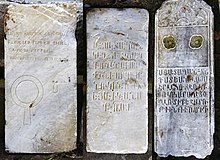 Armenian tombstones from thePangaltı Armenian Cemetery, discovered in 2013 during the excavations for the pedestrianizationproject of Taksim Square. The cemetery was located on the northern section of Taksim Gezi Park.

From 1560 to 1939 the Pangaltı Armenian Cemetery was located on the northern section of today's Gezi Park, at the vicinity of the Surp Agop Hospital.[8] The land plot of the cemetery was confiscated by the Turkish government as part of Henri Prost's plans to build Taksim Gezi Park and it was subsequently demolished in 1939.[7][9][10] In 2013, during excavations conducted for the tunnel of Cumhuriyet Avenue as part of the pedestrianization project of Taksim Square, 16 tombstones from the cemetery were discovered.[11] 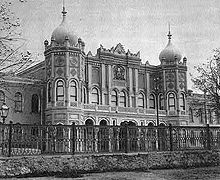 One of the main entrance gates, designed in Orientalist style, of the Halil Pasha Artillery Barracks (1806) which was transformed into Taksim Stadiumin 1921. The building was demolished between 1939 and 1940 to be replaced by the southern section of Taksim Gezi Park.

Known in the 19th century as the Grand Artillery Barracks at Pera, the Halil Pasha Artillery Barracks complex (Turkish: Halil Paşa Topçu Kışlası) was built in 1806. The facade of the barracks was designed in the late Ottoman architecture, with Orientalist style details such as onion domeson the monumental entrance gates, which didn't belong to classical Ottoman architecture.[12] The barracks suffered considerable damage during the 31 March Incident in 1909.[13] The barracks, which was later transformed into Taksim Stadium in 1921, was demolished between 1939 and 1940 as part of Henri Prost's plans to build Taksim Gezi Park.

In 1936, the French architect and city planner Henri Prost (1874–1959) was invited to Turkey by President Mustafa Kemal Atatürk. He was tasked with the preparation of Istanbul's rough-cut urban planning and rebuilding, which lasted until 1951. In accordance with Prost's plans for Taksim Square, which he completed in 1939, the barracks buildings were demolished between 1939 and 1940 by the city governor and mayorLütfi Kırdar (in office 1938–1949).[13] Prost described the place before demolition as following:

The area included the old remains of an old cemetery, several jerry-built garage buildings, a barracks in ruins, and a number of shops and cafés around the square where the monument was located.[3]

It should be noted, that in 1921 the internal courtyard of the barracks was rearranged and used as the Taksim Stadium. The Turkish national football team played their first ever official international match in this stadium against Romania on October 26, 1923, that ended up with a 2–2 draw.[13] The soccer matches were discontinued on March 25, 1940.[3]

Prost's master city plan, which came into force in 1939, provided for a much larger Taksim Gezi Park with continuous green space, which he called Park No. 2, covering an area of 30 ha (74 acres) between the neighborhoods of Taksim, Nişantaşı and Maçka extending to Bosphorus including the Dolmabahçe Valley.[3] The larger park was intended to offer green space for recreation to Istanbul's residents and tourists, but it has never been completely realized.[13]

The construction of Taksim Gezi Park was completed in 1943, and it was opened under the name "İnönü Esplanade"[3] in honor of the second Turkish president İsmet İnönü (in office 1938–1950) by Lütfi Kırdar personally. The covering area of the park diminished in later years with the construction of big hotels in the outlying zone. Nevertheless, the park remained an important recreational area within the downtown of the city, and its appearance changed to the better after restoration

Thank you for your comment!
Please fill all fields, and validate captcha

This is a call-to-action section message